Liam Saddington is a Career Development Lecturer in Geography at the School of Geography, University of Oxford. He’s exploring how climate change is affecting small island states. 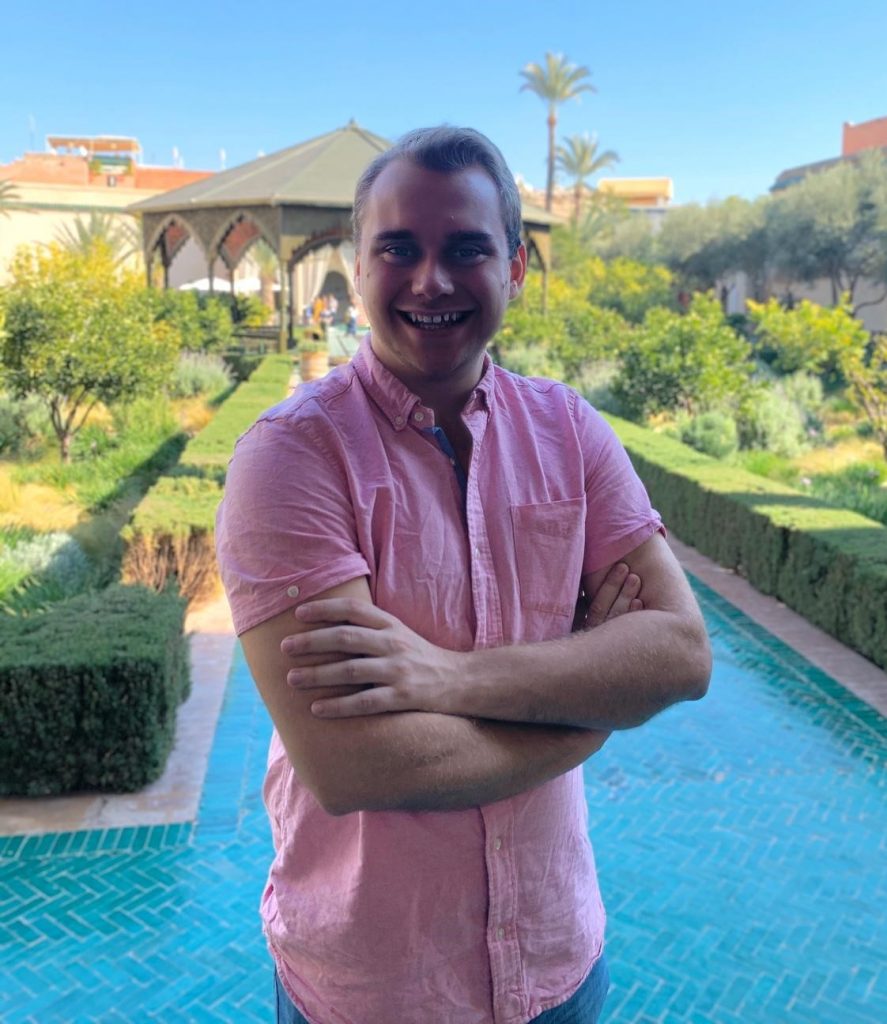 Liam first joined Oxford to read for a BA in Geography in 2013, before completing his MSc in Nature, Society and Environmental Governance in 2017. He read for a DPhil in Geography and the Environment at the School in 2021, with his thesis “Rising Seas and Sinking Island: The Geopolitics of Climate Change in Tuvalu and Kiribati”. He tells us about his research, which explores how climate change is threatening the future of small island states.

I explore how climate change is affecting small island states. Over the past four years, I have travelled to three different island countries – Fiji, Tuvalu and Seychelles – to investigate climate change. I’m interested in what the future might look like for islands threatened by rising sea levels.

How is climate change causing sea levels to rise?

Human activity is changing our environment. From burning fossils, changing farming practices and deforestation, humanity has been responsible for the increase in the concentration of greenhouse gases in the atmosphere.

Over time, this growth in atmospheric greenhouse gases causes an increase in the Earth’s temperature which in turn leads to rising sea levels. Firstly, as ice sheets and glaciers melt, more water enters the oceans. Secondly, as the ocean increases in temperature, it also expands in volume.

According to the recent Intergovernmental Panel on Climate Change Report (2019), global mean sea levels have risen between 0.12m and 0.21m in the period between 1902 and 2015. Although this might not sound like much, the rate of sea level rise has accelerated in recent decades. Between 2006 and 2015, the sea level rose by about 3.6mm per year.

It’s also worth noting that sea levels are not rising at the same rate around the world, in some areas such as in the South Pacific, sea levels are rising at three times the global average. This poses many problems for human settlements, road and ports in coastal areas, deltas and on islands.

What is an atoll state? And why does climate change pose a threat?

Atolls are low-lying coral reef islands that are found in the tropics. Typically, the islands surround a central piece of water called a lagoon. Atoll states’ describes a country that’s territory is mostly formed from atolls, there are four UN members that fulfil this criteria – Kiribati, Tuvalu, the Maldives and the Marshall Islands. Tokelau consists of three atolls, but it is a dependent territory of New Zealand. These countries work together through a group called the Coalition of Low-Lying Atoll Nations on Climate Change.

Climate change poses multiple threats for atoll states. As they’re only a few metres above sea level, predictions for sea level rise in the 21st century mean that may be fully submerged in the future. Sea level rise poses other problems… it makes these islands more vulnerable to storm surges and saltwater contamination can make agriculture difficult. It also means that their coastlines are more vulnerable to erosion.

More broadly, climate change is going to increase water insecurity. These islands depend on rainwater for their needs – and this rainfall is becoming more variable in the future. As well, climate change could lead to more powerful tropical storms affecting places like Tuvalu, causing more damage and putting lives and people at risk. New tropical diseases could spread to new areas and coral reefs are under stress from ocean acidification (where oceans become more acidic) and increasing ocean temperatures.

Will this mean that these countries disappear?

Not necessarily. Islanders from places like Tuvalu and Kiribati want to remain on their islands. They are pursuing a range of forms of climate change adaptation. Adaptation involves altering existing systems, processes and places in order to cope with changes in the physical environment. For example, the Tuvaluan Coastal Adaptation project is protecting vulnerable coastline in Tuvalu against sea level rise by building a sea wall.

Other forms of adaptation might focus on something like agriculture, so introducing salt-resistant or drought-resistant crops that can cope with the changing environmental conditions.

If things continue to get worse, there has been some discussion of building artificial islands or much larger land reclamation projects. Leaders in Kiribati have been discussing the Temaiku Project, a plan to reclaim a large amount of the lagoon to house up to 30,000 people! This reclaimed land would be elevated above the height of the current islands to protect people.

Internationally, the leaders and diplomats of small island states are engaging in diplomacy to try and increase global ambition to tackle the causes of climate change. In 2015, the world’s countries came together to try and tackle climate change and created the Paris Agreement. Under the Paris Agreement, countries are attempting to try and keep the global temperature increase in the 21st century well below 2 degrees above pre-industrial levels, with an aim to limit temperature increases to 1.5 degrees. Ambitious action on climate change gives places like Tuvalu and Kiribati a much better chance at survival – some activists from islands have championed the “1.5 to stay alive” slogan in their protests.

What does this mean for people affected by climate change?

Sea level rise occurs relatively slowly – but people are already being affected. In low-lying island communities, people are already starting to notice that King Tides (exceptionally high tides which occur a few times a year) are getting higher.

In 2015, Tropical Cyclone Pam affected over half of Tuvalu’s population and caused an estimated US$10 million worth of damage in the country. Moreover, in 2011, Tuvalu nearly ran out of freshwater during a drought. These environmental stresses are difficult to adapt to as many atoll states are among the poorest countries on Earth.

People do not want to leave their home islands, but they may be forced to migrate if environmental conditions get worse. I think that people will try to adapt themselves, but there may be limits to what is possible in some island communities. Whilst international researchers have discussed the idea of climate migration, this has been rejected by the island governments in places like Tuvalu. Kiribati for a while was talking about “Migration with Dignity”, a plan to help enable people to migrate if they wanted to. However, this was unpopular with the population and the new government is not pursuing migration as a solution to climate change.

Is this definitely going to happen?

Not necessarily! Hopefully, the global community can act on climate change, move towards renewable energy and reduced global increases in temperature. However, currently, it remains unclear if enough will be done to tackle climate change. As well, some scientists argue that atolls are responding faster to climate change than previously thought – with evidence suggesting they may be growing. However, this is highly controversial and has been rejected by islanders such as the former Prime Minister of Tuvalu – Enele Sopoaga.