Tim Palmer is a Royal Society Research Professor in Climate Physics, a senior Fellow at the Oxford Martin Institute, and a Professorial Fellow at Jesus College. 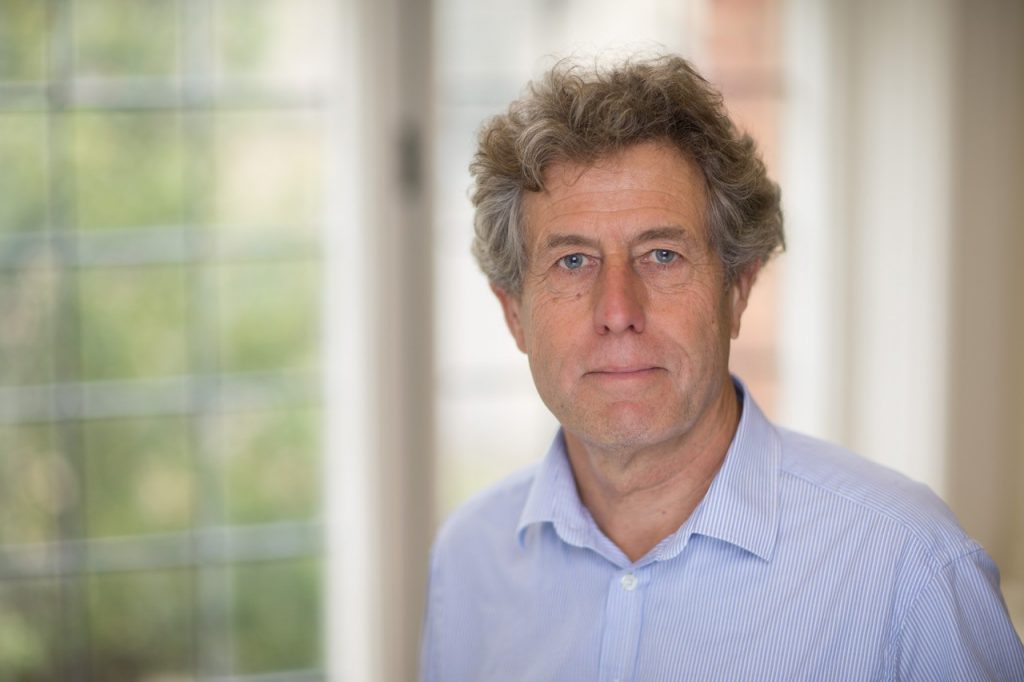 An internationally-renowned meteorologist with a particular interest in the predictability and dynamics of the weather and climate. Tim’s work has led to the development of forecasting techniques which have been implemented by the Met Office and the European Centre for Medium-Range Weather Forecasts and are now standard in weather and climate prediction around the world.

How did you come to be at Jesus College?

I originally did my PhD in the 1970s on the topic of Astrophysics and Black Holes – a childhood ambition. However, I wanted my work to have an impact on people’s everyday lives rather than focusing on something abstract, so I began to look at where else I could apply my scientific skills. I became aware that climate was a mathematical field, and have worked in this area ever since. In 2010 I applied for a Royal Society research professorship, and I also joined Jesus College as a Professorial Fellow at the same time.

Why did you choose this topic?

Climate change is at the forefront of the news today but the concept is nothing new. The scientific community was aware of greenhouse gases trapping heat in the atmosphere in the 19th Century. However, in addition to climate change, predicting and understanding natural climate variability is important too. In the 1980s Live Aid brought the issue of drought in Sub-Saharan Africa and its causes to everyone’s attention, so the topic of climate change and climate variability has been relevant for a long time.

What are the main challenges of your research?

It is very hard to predict the environment. Weather can be predicted a few days ahead. Phenomena such as El Niño and monsoon circulations can be predicted seasonally.  But the problem with climate change is that you cannot conduct a controlled experiment in laboratory conditions to determine where we will be in 50 years’ time.

Instead we try to model climate change mathematically using equations and the laws of physics, but there are so many different components that you literally need the biggest computers in the world to do so, and even then some things have to be approximated. The dynamics of clouds or ocean eddies, for example, cannot be represented precisely but have to be done with simplified formalae, resulting in uncertainty. However, if we cannot make reliable predictions, on both a global and regional level, it will be difficult to plan ahead. Awareness of climate change is a motivating factor in my work, but what I focus on is the question of what we can predict and how to predict that reliably.

What are you currently working on?

As an example, at Oxford we are examining how to make use of emerging techniques in AI in making reliable predictions. I recently organised a conference on Machine Learning for Weather and Climate Modelling here in Oxford, and while there are real opportunities for using AI to significantly speed up computation, we need to exercise caution about the limitations. Machine learning derives information or rules from data that already exists, but if something occurs which is new and out of sample,  AI may not necessarily be able to extrapolate this reliably to predict phenomena with intensities (for example) have never been seen before. Therefore, if we wholly base a computer code on AI rather than the primitive laws of physics, there is a danger that the new models would be unable to adequately predict our climate in 50 years, which is out of range for the current data.

What impact(s) do you hope will emerge from your research?

We are still a long way from achieving zero CO2 emissions, which means climate will continue to change, and society will need to become more resilient to the changing nature of extremes. This means that we need reliable climate -hange models that tell policy makers at a country and regional level what it will mean for them, determining what extremes will occur, where and how often.

On a sub-country level, some areas will see a net increase in rainfall, and some will see a decrease. In the UK, for example, improved models at a regional level will enable areas like Scotland or Greater Manchester to decide whether they need better reservoirs or more flood defences.  However, on a global level, we need to invest more to develop resilience in countries where climate change could be disastrous. Large parts of the Tropics and Subtropics, for example, may, from time to time, become too hot and humid for people to lose heat even by sweating, and they will die unless they can access air conditioning. Even if governments don’t want to be altruistic towards the developing world, the effects in time will lead to mass immigration towards the poles if climates become unbearable in these countries.  Understanding when and how often such deadly heat waves will occur in the future is a key issue for climate science.

How can effective climate change modelling lead to solutions?

There are two main issues with climate change. Firstly, we need to find ways to reduce carbon emissions and use of fossil fuels, and to stop further degradation of the environment from man-made interventions, so scientific predictions of impact are necessary to create the political and economic framework to support this. We need to move to carbon neutral energy production – solar and renewable energy does that – and transport issues are being explored including electric cars, and even a possible synthetic replacement for kerosene used in air travel made from carbon in the air combined with hydrogen.  However, model predictions of global warming are important in knowing how urgent decarbonisation is. A key uncertainty in this area concerns whether changes in cloud cover will make climate change more or less severe. We need better models to have any confidence in the magnitude, and even sign, of these cloud feebacks. If we cannot cut emissions quickly enough, we may need to attempt climate geo-engineering to mitigate effects, and this is where we really need reliable forecasting models, because at the moment it is very speculative. One idea is to send aircraft into the atmosphere to spray sulphuric acid and water droplets which form sulphate aerosols to reflect sunlight back into space. This may work but we cannot be sure that there won’t be unforeseen consequences which could be worse, such as radically changing the supply of moisture to rainforest areas – so accurate models are essential.

However, models are also vital in our attempts to make society more resilient to the changing climate, particularly to the changing nature of extremes of climate. This will require accurate predictions of regional climate: not just temperature, but humidity, storms, drought, floods, sea-level and so on.  Reliable predictions of all these variables requires more detailed and complex models than we currently have.

What will you be focusing on next?

With the Director of the Max Planck Institute for Meteorolgoy, I have recently written a Commentary which has just appeared in the  Proceedings of the National Academy of Sciences (PNAS) in the United States, proposing that in order to achieve a breakthrough in climate change modelling, we need to pool our human and computational resources multinationally, in much the same way that CERN enabled the study of physics to move ahead, which led to the discovery of the Higgs Boson.  Currently we have many models developed at the institute level. However, individual institutes do not have the resources needed to make a breakthrough in the realism and accuracy of climate modelling. The task has become too complex. Working together, we could potentially make far better predictions.