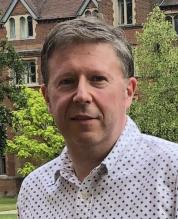 Professor David Willis is the Jesus Professor of Celtic at the University of Oxford and a professorial fellow at Jesus College.

I did an MA in Russian and German and an MPhil. in General Linguistics at St John’s College, Oxford, before completing a doctorate here on word order in the history of Welsh (1996). I was a Junior Research Fellow at Somerville College, Oxford, and a British Academy Postdoctoral Research Fellow at Jesus before lecturing first in at the University of Manchester and then at Selwyn College, Cambridge. I returned to Oxford in 2020 to take up the Jesus Chair of Celtic.

I specialise in historical linguistics and in theoretical and dialect syntax, working primarily on material from Celtic languages. I am interested in the mechanisms of syntactic variation and change, in syntactic reconstruction, and in the use of electronic corpora in historical linguistics. My previous research projects include the Historical Corpus of the Welsh Language, the Syntactic Atlas of Welsh Dialects, the History of Negation in the Languages of European and the Mediterranean, and Tweetolectology. I have most recently begun a project with colleagues at HU Berlin on the history of subject pronouns in the languages of northern Europe.