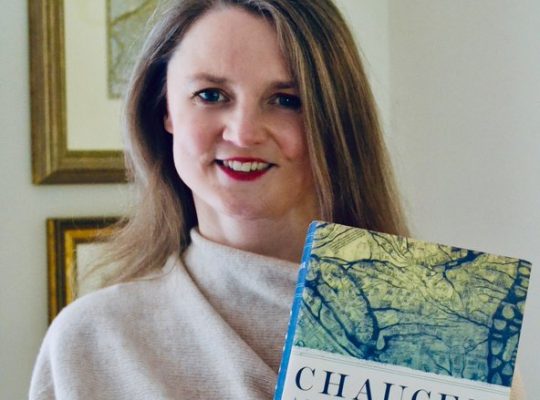 Professor Marion Turner is Professor of English Literature at the University of Oxford and Tutorial Fellow in English at Jesus College.

I hold an MA and a DPhil from Oxford, as well as an MA from York. I was a Fellow by Examination (Prize Fellow) at Magdalen College, Oxford, and also taught at King’s College London before returning to Oxford in 2007 to take up a Tutorial Fellowship at Jesus. I have held research fellowships from the Leverhulme Trust, the Wellcome Trust, and the British Academy. I am an elected Trustee of the New Chaucer Society.

My latest book, Chaucer: A European Life, is a biography of the medieval poet, Geoffrey Chaucer, and was published by Princeton in 2019.

Old English, Middle English and early Tudor literature, Chaucer, Course II, third year option on ‘Writing Lives’, dissertation supervision on many topics (examples include affect and emotion in Margery Kempe and Sylvia Plath, the senses in the writings of medieval women, the loathly lady story from Chaucer to Shrek).

MSt C course: Placing Chaucer. MSt dissertation supervision – recent topics include suicide in Troilus and Criseyde and its sources; Boethius’s Consolation of Philosophy in its medieval French and English translations; Ovid’s Heroides and Chaucer’s poetry; the representation of consent in the later fourteenth century. Doctoral topics supervised include the poetics of practicality, a comparison of literary and medical texts; and the use of Ovid’s exile poetry in later medieval literature. I am interested in supervising doctorates on topics including Chaucer, Usk, the Gawain-poet, literature and medicine, life-writing, and fourteenth-century secular and political literature. Interdisciplinary and theoretically-oriented projects are welcome.

It was chosen as a Book of the Year 2019 by the Times, The Sunday Times, and the TLS; and as a best summer read by the Evening Standard and the TLS. Chaucer: A European Life was also picked as a Choice Outstanding Academic Title of the Year and as a finalist for the PROSE Award in Biography and Autobiography, Association of American Publishers 2019. It was shortlisted for the Wolfson History Prize 2020.

My first book – Chaucerian Conflict – came out with Oxford University Press in 2007 and I also edited A Handbook of Middle English Studies for Wiley-Blackwell in 2013. I have published many articles on late medieval literature and history and on life-writing. I am also interested in literature and medicine, and in the relationship between space and textual production.

I am currently writing about medieval women, and gender in history more generally. My next book is a ‘biography’ of Chaucer’s Wife of Bath, from antiquity to the present day.

I enjoy speaking to diverse audiences, and have appeared on several programmes on the BBC and Channel 4, talking about Chaucer and other aspects of late-medieval culture. For instance, in the UK, I have been interviewed on Radio 4’s Start the Week and Woman’s Hour; Radio 3’s Free Thinking, and Radio 5’s Up All Night; in the USA, on NPR’s On Point; I have also been interviewed on Irish and Australian radio. Recent TV appearances include Channel 4’s Britain’s Most Historic Towns. I have given public lectures at museums and galleries, and spoken at literary festivals and history festivals including Hay on Wye, Cheltenham, and Dartington Hall. I often talk at schools, and have run workshops at sixth-form colleges, university taster days and sessions, and reading groups on social media. Every year I speak at a Chaucer Day for sixth formers, run by the university, the Weston Library, and the Ashmolean Museum, and I regularly contribute to Jesus College’s Seren Summer School.

Hear one of my radio interviews here.