We are delighted to announce the appointment of entomologist Professor Geraldine Wright as the new Hope Professor of Zoology and Professorial Fellow at Jesus College. 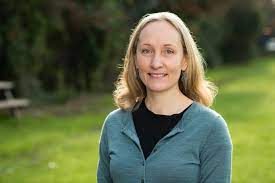 Prof Wright is currently Professor of Comparative Physiology and Organismal Biology in the Department of Zoology at the University of Oxford and Tutorial Fellow at Hertford College. She is the first woman to hold this prestigious professorship, and follows eminent British zoologist Professor Sir Charles Godfray, who held the post from 2006-2018.

Prof Wright’s research focuses on the study how insects detect, learn about, and regulate their intake of nutrients. Her lab – the Bee Research Lab – specifically investigates the nutrition and physiology of honeybees and bumblebees, using an approach that includes sensory biology of the chemical senses, learning and memory, nutrition, and the ecology of plant-pollinator interactions. She is particularly interested in secondary metabolites in plants and the roles they play in luring bees to be deceived or addicted to floral nectar.

Her notable work includes the discovery that caffeine in floral nectar enhances bee memory, that neonicotinoid pesticides attract bees to food sources, and that the bee’s sense of taste has specialized mechanisms for the detection of sugars. Her work on caffeine and bee memory has been highlighted in Michael Pollan’s recent popular science book This is Your Mind on Plants.

Her lab’s BBSRC-funded research is currently devoted to understanding the nutrition of bees. With her collaborators, in Israel and at the Jodrell Lab of the Royal Botanic Gardens at Kew, her group has created new pollen substitute feeds for bees based on this research. They have co-founded a spin out company called Apix Nutrition (now Apix Biosciences) which received its first round of private investment in 2021. Her most recent research publications include Pollen sterols are associated with phylogeny and environment but not with pollinator guilds. (May 2021, The New Phytologist) and Regulation of dietary intake of protein and lipid by nurse-age adult worker honeybees (Feb 2021, J Exp Biol).

Prof Wright was born in Wyoming US and completed a BSc in Botany at the University of Wyoming before joining the University of Oxford and Hertford College in 1994 as a Rhodes Scholar. Her PhD was in insect nutrition and herbivory with Prof Steve Simpson and Dr David Raubenheimer (now both at the Charles Perkins Institute at the University of Sydney).  Following a return to the US as a postdoctoral researcher at Ohio State University, where she investigated olfaction in honeybees and completed an MSc in Statistics, Prof Wright joined Newcastle University as a lecturer, then Reader and subsequently Professor in Neuroethology in the Institute of Neuroscience. She returned to Oxford in 2018 to join the Department of Zoology and Hertford College.

Prof Wright says, “I’m honoured to have been chosen as the new Hope Professor and I look forward to becoming part of the fellowship of Jesus College.”

The Hope Professor of Zoology was founded in the mid-19th century by Frederick William Hope, one of the founding collectors of the Oxford University Museum of Natural History (OUMNH), to promote the study of Zoology at the University. Its first holder was entomologist John Obadiah Westwood, who held the position from 1860 – 1893 and was based in the OUMNH where he looked after its growing and impressive collection of insects.