Women at Jesus – The Habakkuk Archive

As the University of Oxford celebrates the 100th anniversary of the formal admission of women students, it’s a prescient moment to also recognise that, in 1974, Jesus became one of the first five Oxford colleges to go ‘co-ed’ by inviting applications from the most able students regardless of their gender.

A flagstone, laid at the Turl Street entrance, celebrates the women who enrolled here for the first time in 1974, but the discussions and debates on admitting women to Jesus date back much earlier. It is in the correspondence files of Sir John Habakkuk, Principal from 1967-1984, now preserved in the archives, that we first see evidence of the multiple letters, reports and memoranda dating back to 1969 that were circulated on the issue of co-education. 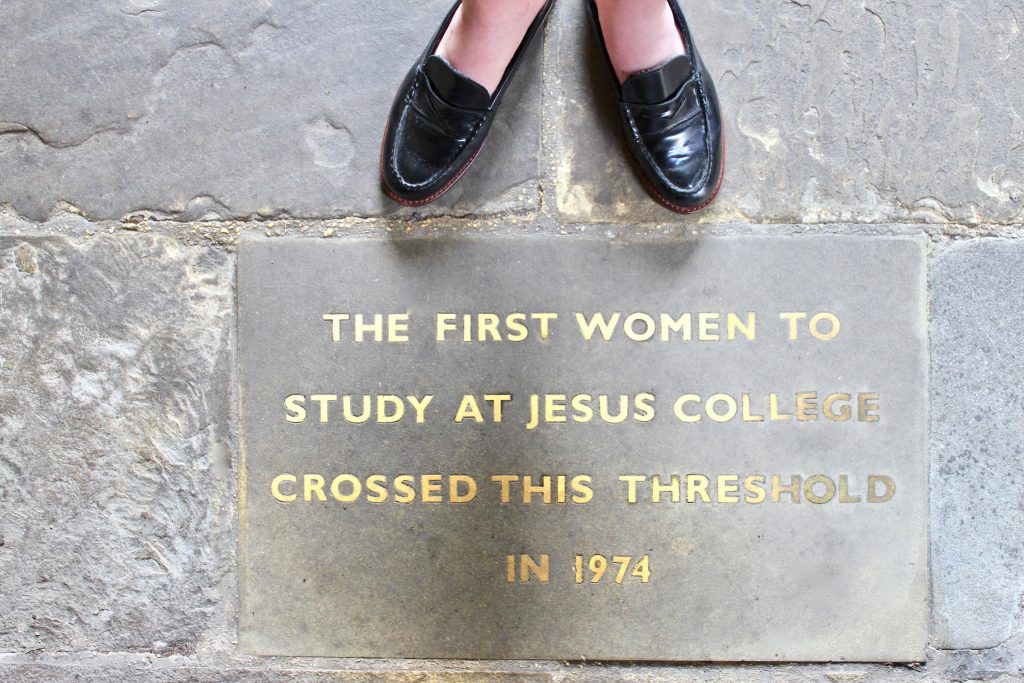 This flagstone was laid to celebrate the first women to study at Jesus College, in 1974

The College Archive shows that the question of admitting women was first formally raised at a College meeting on 16 December 1970, and voted for overwhelmingly – with 13 for the motion and just 3 against. It was also agreed at the meeting that Jesus would join the Working Party of Colleges, set up to explore the principle of co-education at Oxford. A College Committee for Co-education was also established.

The Working Party of Colleges comprised nine Oxford colleges who had expressed an interest in co-education, but in a report to the Hebdomadal Council from November 1971 we see that the governing bodies of only four had voted to give themselves power ‘by the amendment of their statutes, to admit women’; Jesus, Brasenose, New College and St Catherine’s. A fifth college, Wadham, followed a month later.

In March 1972, Principal Habakkuk wrote to the heads of all Colleges to inform his counterparts of the pionnering decision taken by Jesus and the other four colleges to admit women. This letter also shows that discussions had taken place between the men’s colleges and representatives from the five women’s colleges at Oxford:

“In his letter of the 30th November 1971, to the heads of all societies, the Registrar drew attention to the discussion between a group of men’s colleges interested in admitting women undergraduates and the representatives of the five women’s colleges. As a result of the discussions, agreement has now been reached between Brasenose, Hertford, Jesus, St Catherine’s, Wadham, Lady Margaret Hall, St Anne’s, St Hilda’s, St Hugh’s and Somerville on arrangements for the admission of women undergraduates into the men’s colleges concerned in this scheme.”

It would take another two years before the first women undergraduates, suitcases and books in hand, stepped through the Jesus College gate, but it was worth the wait. In 2019, we celebrated 45 years of Women at Jesus with a series of events that marked the College’s pioneering spirit and welcomed back our inaugural female alumni – many of whom have gone on to illustrious careers in fields as diverse as surgery and wine-making.

As a coda to this story, our College Archivist, Robin Darwall-Smith, also came across an intriguing document from 1982, in which Principal Habakkuk, writing to the Master of Pembroke College Cambridge, reflected on the experience of Jesus becoming co-educational. He wrote:

“I think that all my colleagues feel the ‘experiment’ has been very successful. The College is a pleasanter place for senior and junior members alike, the intellectual levels are higher – not spectacularly but significantly so“.

On the admission of women to Pembroke though, his feelings were more mixed:

“When virtually all the other men’s colleges in Oxford decided to admit women, I thought that a mistake had been made. I believe that some boys, as girls, have a preference for a single-sex college, and that Oxford ought to provide them with this choice.”

We don’t have the details of the response from the Master of Pembroke to Habakkuk’s letter, but the fact that Jesus now has consistently equal numbers of female and male undergraduates, and  the University now awards degrees to more women than men, it is clear that the ‘experiment’ has been very successful indeed.