Jesus College runs several programmes of events and talks throughout the academic year, covering a diverse range of topics and aimed at a wide range of audiences.

Many of these events are recorded, so you can watch and enjoy them at a time that suits you. We have listed many of our recent event films below, in order of the topic they cover. We also produce films about our projects (such as the Northgate development), our Access work, College tours and our Fellow’s research, which are also available to view.

Click on the relevant box below to find further information and links to the films recorded. You can also watch past events on the Jesus College YouTube channel. If you subscribe to our YouTube channel, you will receive a notification message when new films are published. 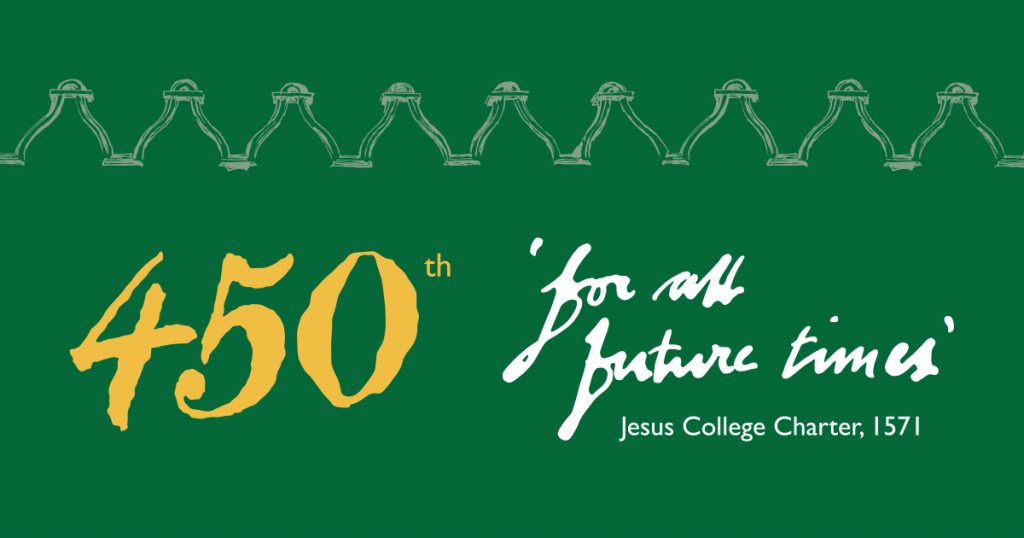 In 2021, Jesus College celebrates it’s 450th Anniversary. Below are links to recorded online events that have taken place so far and this list will be added to throughout the year.

An introduction to the 450th Anniversary by our Principal.

Zeitlyn Fellow and Tutor in History, Professor Patricia Clavin FBA, leads an informal lunchtime discussion with the editor of the new College history, Emeritus Fellow Dr Felicity Heal, alongside three of its major contributors – Emeritus Fellow Professor Richard Bosworth, College Archivist, Dr Robin Darwall-Smith, and alumnus Dr Colin Haydon (1975, History). The contributors will explore what makes this version different from previous College histories, as well as some of the source material used to assemble this comprehensive examination of Jesus College life over the last four and a half centuries.

Dr Norman Jones, Elizabethan historian and former Senior Research Fellow at Jesus College, talks about the creation of the College’s Charter in 1571.

Little Wales beyond England: Welsh and Welsh Speakers in Oxford in the Twentieth Century

Professor David Willis, Jesus Chair of Celtic at the University of Oxford, and Dr Lowri Hughes, Jesus alumna and Head of Policy and Development at Canolfan Bedwyr, Bangor University’s Centre for Welsh Language Services, Research and Technology. Please note that there were occasional problems with the connection that impacted on the audio quality of this event.

Dr Mark Williams, Associate Professor of Global Medieval Literature, and Fellow and Tutor in English at St Edmund Hall, Oxford, introduces the literary and philosophical works of the twin brothers Henry and Thomas Vaughan, focusing largely on Thomas’s mysterious and abstruse works, and also explaining the influence of magic on Henry’s poetry.

On 11th February 2021 we opened our event series Celebrating the Elizabethan College.  In this event, Professor Suzanne Aspden (Associate Professor of Music and Fellow of Jesus College), discussed the music that would have been performed and listened to within the College communities of Elizabethan Oxford with Elizabeth Kenny (lute player, Director of Theatre of the Ayre and Dean of Students at the Royal Academy of Music). The event was hosted by Helen Morag Fellow of English and curator of the Celebrating the Elizabethan College series, Professor Paulina Kewes.

Celebrating the Elizabethan College:  Books and histories in the reign of Elizabeth 1

What Really Matters - Discussions on society's most pressing issues

What Really Matters (WRM) is a Jesus College initiative which aims to engage people in some of society’s most pressing issues through discussions with high-profile speakers in related subjects.

It is a collaborative series overseen by Patricia Daley (Vice Principal, Equality & Diversity Fellow and Professor of the Human Geography of Africa at the University of Oxford),  Paulina Kewes (Professor of English Literature and Fellow), and originator Dr Matthew Williams (Access Fellow).

The first WRM series ran in 2020. Click on the event title to link to the recording of each discussion.

Discussion 1 – FORUM ON RACE AND EDUCATION

The discussion covered the role of education in bringing about societal change in the UK, anti-racism in the context of white privilege and what needs to happen now to bring about racial equality? The black experience participants gave moving personal testimonies of their journeys and the online audience were able to ask questions.

Discussion 2 – THE ECONOMY, SUSTAINABILITY AND THE WORKPLACE IN A POST-PANDEMIC WORLD

In the second of the series, we explored how we might approach the economic and societal challenges we face in a post-pandemic world. ‘The economy, sustainability and the workplace in a post-pandemic world’ brought together a panel of experts in finance, economics, geography, and sustainability, to look at the actual and potential impacts of COVID 19 on the economy and consider whether they are likely to be short or long-term.

Discussion 3 – THE SHAPE OF THINGS TO COME

This discussion focused on a new initiative that aims to promote and celebrate the social sciences, humanities and arts. SHAPE (Social Sciences, Humanities and Arts for People and the Economy) aims to emulate the influence and reputation held by STEM subjects – science, technology, engineering and maths – in secondary education and academic research.

Discussion 4 – ARE WE ALONE IN THE UNIVERSE?

It’s the perennial question that has challenged scientists for decades and inspired a plethora of science fiction writers and filmmakers. Our panel discussed the scientific advances being made in our search to answer this age old question and touched on the philosophical implications of such a detection on contextualizing our place in the Cosmos.

Did you know that many biologists consider that we are in the midst of a mass extinction: and one where humanity is the cataclysm? In this conversation, our experts in the histories of past mass extinctions, conservation biologists trying to save species that are at risk of extinction, and experts on how one day we may be able to bring extinct species back to life, discussed whether we should care, and how much?

During the COVID-19 pandemic we are unable to provide tours of the College to prospective students, so our students have created these films to give you a flavour of the main College site and our accommodation.

Join students and staff in a virtual tour of our 450-year-old Oxford College.

Take a tour around Jesus College

Take a tour around our undergraduate accommodation

Will, Ryan, Tomer, Daisy and Natalie guide you around some second year undergraduate accommodation for Jesus College

Learn more about the Northgate development through our series of films about the project:

NORTHGATE – Shaping the future of learning and interdisciplinary research

Exploring Disease and Wildlife in the age of COVID

A podcast by Professor Tim Coulson, Professorial Fellow in Zoology. Recorded in 2020.

Our Character is on the Ballot: Reflections on the US Presidential Election 2020.

Jesus alumnus and President of ABC News, James Goldston (1986, PPE) alongside Tina Fordham, Partner and Head of Global Political Strategy at Avonhurst, and Dr Stuart White, Fellow and Tutor in Politics at Jesus College, discuss the years of Donald Trump’s presidency, the 2020 election and what the result means for democracy, the media, and the future, not only of America, but of the whole planet. The event was introduced and chaired by our Principal, Professor Sir Nigel Shadbolt FRS FREng. Recorded in October 2020.

DPhil alumnus and author Joseph Hone (2012, English) discusses the publication of his first book of narrative non-fiction, The Paper Chase: The Printer, the Spymaster, and the Hunt for the Rebel Pamphleteers. In conversation with his former supervisor Professor Paulina Kewes, Joe takes us through his latest book, examining the scandal caused by an anonymous pamphlet being distributed in eighteenth-century London. Recorded in 2021.

Jesus Graduate student Malavika Nair performs a semi-classical Indian dance piece in the College Chapel, as part of the Diwali celebrations in November 2018.

A celebration of Norman and Edna Manley’s lives. We welcomed members of the college, the university, the local community, and Manley’s extended family into the college hall where Manley’s portrait hangs. ‘Towards a Wider Life’ was how Manley described his move from law into politics in the 1930s. The event also included two performances from Oxford based artists, Kuumba Nia Arts, Unlock the Chains Collective and Euton Daley MBE.

In 2022 we are running a six-part virtual event series, featuring College members past and present, that explores the challenges and opportunities facing the world of tomorrow. All recordings from the events will be hosted here.

The Future of Artificial Intelligence