Accommodation at Jesus College is amongst the best in Oxford and is very popular with our students.

Our accommodation is in three locations. In College, we house all first-year undergraduates during term, and many first-year postgraduates throughout the year. The rooms range in date from the 17th to the 21st century, but are all equipped and maintained to the same high standards. 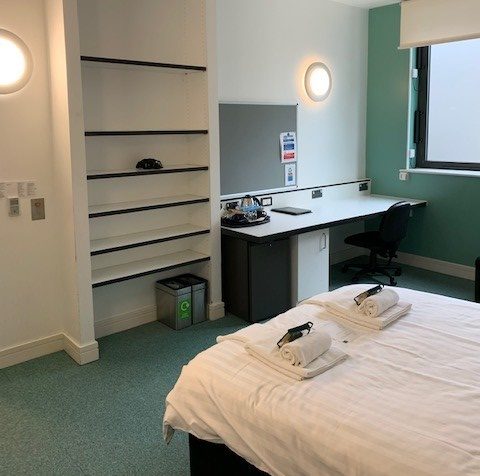 A student room on the main College site

We also have accommodation (as well as teaching and lecture space) at the Ship Street Centre, adjacent to the College.

After their first year, the majority of students move into blocks of College flats, sharing in groups of three or four. Within a flat, students have a study bedroom each and share a living area, kitchen, and one or two bathrooms. The flats are situated in two locations: in North Oxford, 1km from the College and close to the University science area; and in East Oxford, just under 3km from College, next to our sports ground. At the East Oxford site, we have a block of one-bedroom flats principally intended for students who are married or with established partners. 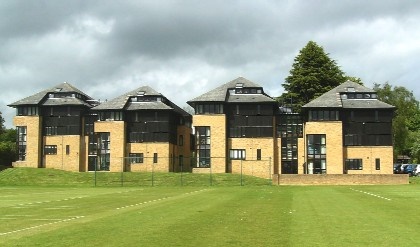 In late 2021, we will open a brand new building on the College’s main site. The Cheng Yu Tung Building will increase our accommodation capacity for postgraduates in the city centre and provide easy access to both College and University facilities. Information on accommodation in the Cheng Yu Tung Building will be made available as soon as possible.

The current (2021/22) lease arrangements and costs for College rooms for undergraduate and graduate students are set out below. Rooms are allocated according to the Undergraduate and Graduate Accommodation Allocation Policies.

Rooms on the central College site, including Ship Street

Room agreements run from the Monday before the start of each of the three full terms to the Saturday of the 8th week (last day) of each term. Rent is payable for the whole of each of these three periods of eight weeks and five days.

Graduates may usually retain the use of their rooms during the Christmas and Easter vacations on notifying the Accommodation office that they wish to do so.

Rent is payable for each extra day the room is retained.

Rooms in the Cheng Yu Tung Building (Graduates only)

Rooms in the Cheng Building are charged at £25.75 per night.

Flats for three or four people at the Annexe sites

Rent for the 2021/22 academic year is £19.68 per person per night, including water rates. Other utility bills are in addition.

As all of the occupants are in full time education there is no Council Tax to pay.

If necessary, graduates will be offered alternative accommodation for periods not covered by their leases.

Flats for couples at the East Oxford site

Rent for the 2021/22 academic year is £35.03 per night, including water rates. Other utility bills are in addition.

Liability for Council Tax is dependent on the status of the occupants, but, if it is due, it is their responsibility.

The standard flat lease for graduates run from the Monday of week 0, before the start of Michaelmas term to Sunday of week 10 of Trinity term (approximately 40 weeks). Flexible leases, with start and/or end dates outside of these periods, are possible subject to availability and the agreement of the Accommodation Services Manager.

The rooms in college vary in size and aspect. The college buildings date from the 17th century onwards, with the most recent addition, Northgate House, opening in 2021. The rooms are regularly refurbished to a high standard.

In Second Quad, the rooms are ‘double sets’: a shared living room with separate bedrooms. Each student has their own working area in the living room.

In Third Quad, rooms are single bedroom/studies with washbasins, furnished with a single bed, a desk, chairs, drawers and a wardrobe.

About 25% of the rooms on the main site have en-suite facilities (priority will be given to those with medical needs). The remaining rooms on the central site have shared bathroom facilities on each staircase. These rooms have a basin in the room.  Staircases are mixed-sex, except where baths or showers do not have separate access. The College guarantees students sharing a set will be of the same sex.

There are five 17th and 18th century houses in Ship Street, built on the old city wall, giving a total of 50 graduate single occupancy rooms. This recently fully redecorated accommodation offers approximately one bathroom per three student rooms and one kitchen per house. In autumn 2010 the Ship Street Centre was opened, in a converted Victorian warehouse, which provides 31 en-suite rooms for undergraduates.

Meals are available in the College dining hall during Full Term and during most of the vacations. There are no kitchen facilities available for undergraduate use on the central site or in Ship Street.

Bedding and towels are not provided. Pre-paid card operated laundry facilities are available on main College site. All rooms have free Wi-Fi and Ethernet connection to the College and University computer networks.

Please note that there are locked bicycle sheds but no parking for cars available on the main College site and Ship Street.

The videos below show the interior of example rooms in Ship Street.

There is additional accommodation for fee-paying students in high-quality College flats on two annexe sites in the city:

The East Oxford site is just less than 3 km from the central College site and next to the College’s Sports Ground. These are self-contained, self-catering flats with 3 or 4 bedrooms, an open plan living/dining room and kitchen, and a bathroom/toilet. All residents have use of the large gardens at the site.

Flats for established couples at the East Oxford site

The College has 11 one-bedroom flats for established couples in a dedicated block (Thelwall House). These are available to graduates who are in an established relationship. The flats comprise an entrance hall, an open plan living room/dining room with a fully fitted kitchen off, a double bedroom, a small study and a bathroom/toilet. Application for the flats is open to graduates in any year whilst they are paying fees. Allocation is made in July each year.

The North Oxford site is situated about 1 km from the central College site, near to the University Science Area. The flats comprise three single bedrooms, a bathroom/WC and a kitchen/dining room. There is also a conservatory for the use of residents, and a large garden area to the rear of the flats.

General information for all flats at the Annexe sites

All flats are fully furnished with electric cookers and refrigerators, but students must provide their own cooking equipment, crockery and cutlery. Bedding and towels are not provided. Basic cleaning equipment is provided in each flat/house, and there are communal vacuum cleaners in each block. Each site has a laundry, with Laundry Card operated automatic washing machines and tumble dryers. Laundry Cards are obtainable from the Lodge.  The laundries also have an iron and ironing board which can be used free of charge.

All flats have free WiFi and ethernet access to the College and University computer networks. Televisions are not provided, and students wishing to bring their own will need a valid television licence.  Please be aware that streaming live content on laptops or personal computers also requires the acquisition of a TV licence.

There are regular bus services from both sites, to and from the city centre, and many students choose to cycle to College. There are locked bicycle sheds at both sites. Limited car parking is available at both sites, but parking permits must be displayed. Due to restrictions on space only one car per flat is allowed a permanent permit, which gives permission to park on site but does not guarantee a space.

We regret that we are unable to accommodate children in any of our properties, as we have no accommodation suitable for families. Please note that the keeping of animals and other pets is not allowed.