Jesus College is delighted to announce that the Francis Jones Prize for Welsh History 2021 has been awarded to Professor D. Densil Morgan for Theologia Cambrensis: Protestant Religion and Theology in Wales. Prof Morgan is Emeritus Fellow of Theology at the University of Wales, Trinity St David, Lampeter. 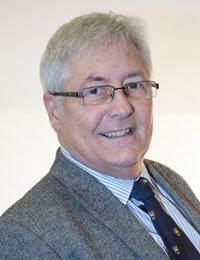 Prof Morgan’s two-volume history of Welsh Protestant theology begins with From Reformation to Revival 1588- 1760 (University of Wales Press, 2018), and is followed by 1760 – 1900: The Long Nineteenth Century ( University of Wales Press, 2021). The prize, made on the recommendation of a panel of judges who, between them, cover the main periods of Welsh history, is awarded for both volumes.

The annual Francis Jones Prize was endowed in 2017 by Sir David Lewis, an Honorary Fellow of Jesus College, to celebrate Welsh historical literature. It is named in memory of Francis Jones (1908–1993), a former Wales Herald Extraordinary.

Professor Thomas Charles Edwards, Emeritus Fellow and former Professor of Celtic at Jesus, was on the judging panel. He says, “Prof Morgan’s Theologia Cambrensis sets the ideas of Welsh theologians in the context of Welsh religion of the period, theology elsewhere in Britain, and broader intellectual culture. Particular topics and figures within the 312 years covered have been given detailed treatment, notably by Morgan himself, but nothing is available on this scale, with this scholarly detail, and with this command of ideas and arguments. Prof Morgan’s Theologia Cambrensis is very likely to be the standard work for many years to come.”