On the Edge of Existence: Rediscovering a Lost Coral

A new documentary featuring marine biologist Dr Bry Wilson, who works in the University of Oxford’s Zoology Department and as a Lecturer in Biology at Jesus, tells the story of how his search for the world’s rarest coral led to an incredible discovery. The film recently launched on the Oxford Sparks platform, and we caught up with Bry to find out more.

Dr Bry Wilson is seldom happier than when out diving on the reefs of remote islands and archipelagos. He’s working to better understand the effects of accelerating climate change on oceanic biological systems, and in particular coral reefs. Most recently he’s been undertaking fieldwork in the Chagos Archipelago in the Central Indian Ocean, one of the world’s most isolated coral reef systems, where he’s studying the resilience and recovery of the reefs. 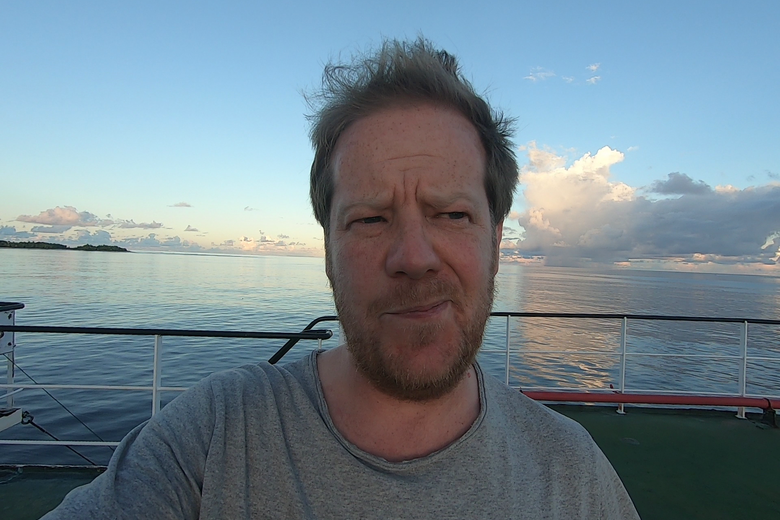 Dr Bry Wilson, on board a research vessel during his 2019 expedition in the Chagos Archipelago MPA.

Bry’s research, which also includes the ongoing development of the University’s first dedicated coral reef aquarium at the John Krebs Field Station at Wytham, is featured in a new documentary by Oxford Sparks, the University-led programme which creates engaging content for wide audiences about Oxford’s scientific research and the people who carry it out. In ‘On the Edge of Existence: Rediscovering a Lost Coral’, he talks about his passion for marine biology, and explains how his search for the world’s rarest coral, the critically-endangered and endemic Chagos brain coral (Ctenella chagius) led to the discovery of a lifetime.

Bry says, “My research is funded by the Bertarelli Foundation (as part of the Bertarelli Program in Marine Science) and the field sites where I undertake this work are the islands and atolls of the Chagos Archipelago, one of the largest marine protected areas (MPAs) in the world. It is the relative remoteness of the archipelago from direct human activity which provides for an almost unique opportunity to study the effects of global climate change on coral reefs in isolation.

As you’ll see in the film, and in the image below, carrying out marine science research in the field comes with a range of challenges – not least when a pandemic strikes. However, in March 2020, on one of my last dives before we had to abort the expedition and return back to the UK, I made an incredible find – the discovery of an abundant population of once thought to be extinct coral called the Chagos brain coral. This coral was once profuse in the archipelago, but recent warming events in the Indian Ocean have decimated it, to the point where it was thought it might have disappeared completely. 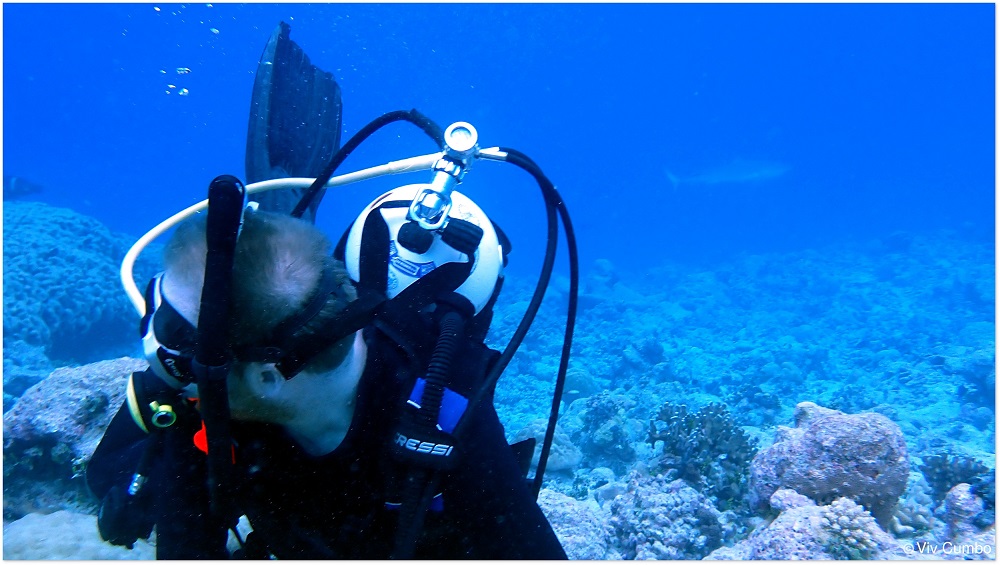 Look behind you! Working in the field in remote locations comes with many challenges- including sharks, difficult sea conditions, and pre-millennial internet connections. Image credit: Viv Cumbo.

In 2018 however, an expedition to the archipelago found a small number of diminished extant living fragments of the coral in the northern atolls of Salomon and Peros Banhos. For me, this news brought huge optimism. On a whim, I included a permit for Ctenella when applying to sample for a number of other more commonly-occurring coral species in the Archipelago, work that would form part of an expedition in early 2019. I hoped I might stumble upon one during my upcoming dives.”

Bry’s optimism paid off. On one afternoon’s dive during that 2019 expedition, he and research associate Amelia Rose spotted their first glimpse of the enigmatic coral on a wide reef terrace close to Moresby Island. The fragment was a small and very pale survivor of a once large colony of Ctenella. Bry tagged the colony and carefully took thumbnail-sized tissue samples, which he brought back to the John Krebs Field Station for DNA sequencing. 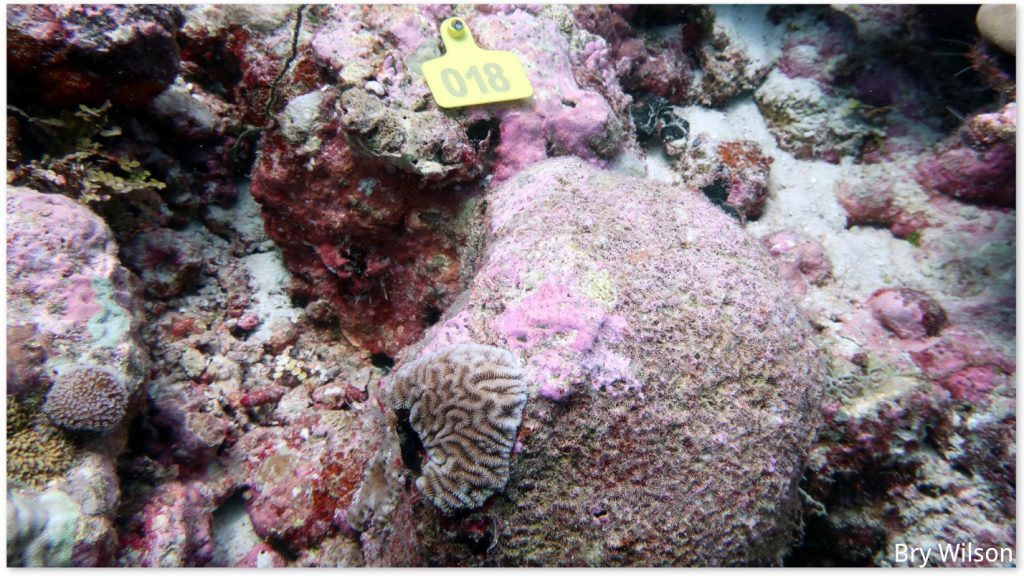 A tiny relic of Ctenella discovered during the 2019 expedition led to optimism that more might be present on the reefs of the Chagos Archipeligo MPA. Image credit: Bry Wilson.

“So little was known about the coral, I hoped that I might be able to extract just enough DNA to sequence its genome and learn more” Bry says. “Fortunately, I was lucky enough to be granted a global research award by QIAGEN, one of the world’s leading biotech companies, which enabled me to extrapolate and explore the coral’s genome, so we could expand our limited knowledge of its existence”.

Encouraged by his initial findings, Bry once again headed out to the Chagos Archipelago MPA in February 2020, as part of the annual BPMS expedition, and it was on a dive as part of this expedition that he made his extraordinary discovery. He says “On our second dive, at the northern end of the island of Diego Garcia, we dropped off the boat’s side and literally on to the largest Ctenella colony I had ever seen – a full and beautifully pink-coloured hemisphere that was likely 5-10 years old. However, we didn’t find any other colonies in the surrounding reef. Feeling slightly deflated, we sailed northwards through the archipelago. At this time, news was just starting to emerge of a novel coronavirus that was taking hold in an increasing number of countries, and we learnt that the borders of countries across the Indian Ocean would soon be closing.

Just two days before the expedition was forced to end, my dive buddy Margaux Steyaert (a DPhil student at Oxford) and I decided to explore the lagoon of Middle Brother Island, one of the Three Brothers in the Great Chagos Bank. After completing our dive survey, our air was running short and so we began making our way back to the dive boat. Then we spotted two unmistakeable colonies of Ctenella – and then two more several metres further along. My heart raced – discovering something hitherto unknown to science is the dream of any explorer – as we saw more and more colonies appear. In total we found some fifteen colonies in the 100m swim back to the boat. Tt was an Aladdin’s Cave of Chagos brain coral!” 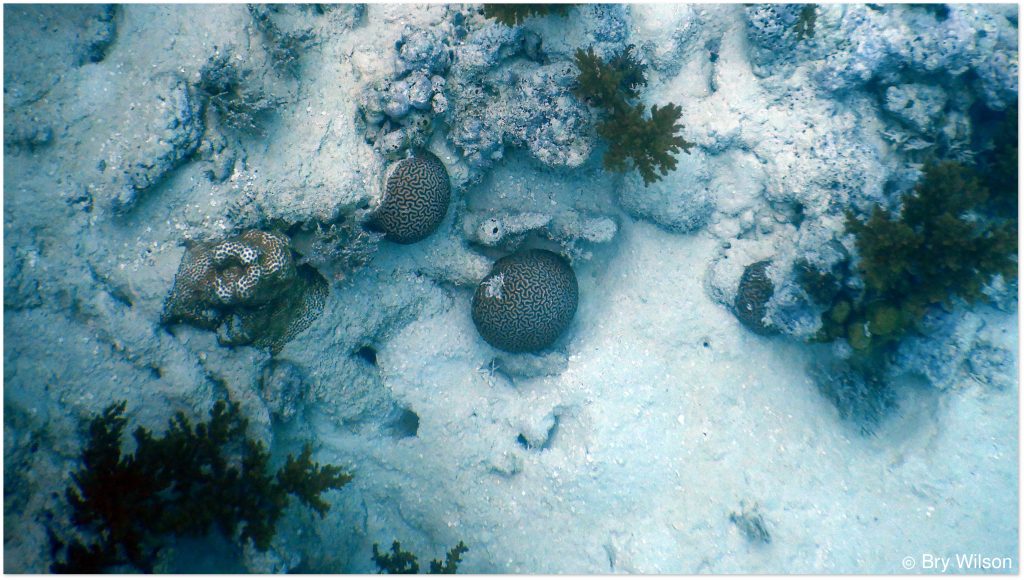 The recognisable brain-like shape of the Chagos brain coral made these two colonies of the coral unmistakeable to Bry and his dive buddy Margaux Steyaert. Image credit: Bry Wilson.

The moment was bittersweet for Bry and the rest of the expedition crew; they knew that the next day they would be making their way to the Maldives, and then flying home to a world in flux, not knowing if and when they would be able to return to the site of their discovery. But, ever the optimist, he focuses on the positives. “There is real hope now, borne in this lagoon –and possibly others currently unexplored – that the Chagos Archipelago MPA might offer a last stronghold for the species, a refuge for this iconic but fragile coral, especially as these colonies would predate the recent warming events in the region. I can’t wait to go back to continue our research, and am hoping to return this coming September”.