The sixth object in our 450th Anniversary 12 Objects digital exhibition, which celebrates the treasures in the College’s collection, is the History thesis of TE Lawrence.

Since the creation of the modern history degree in the late nineteenth century, many history undergraduates at Jesus College, Oxford, have submitted dissertations towards their degrees. Few dissertations, however, have invited as much public interest or as much scholarly discussion as the dissertation written by Thomas Edward Lawrence (1888–1935)—the future ‘Lawrence of Arabia’—and submitted before his finals in 1910. 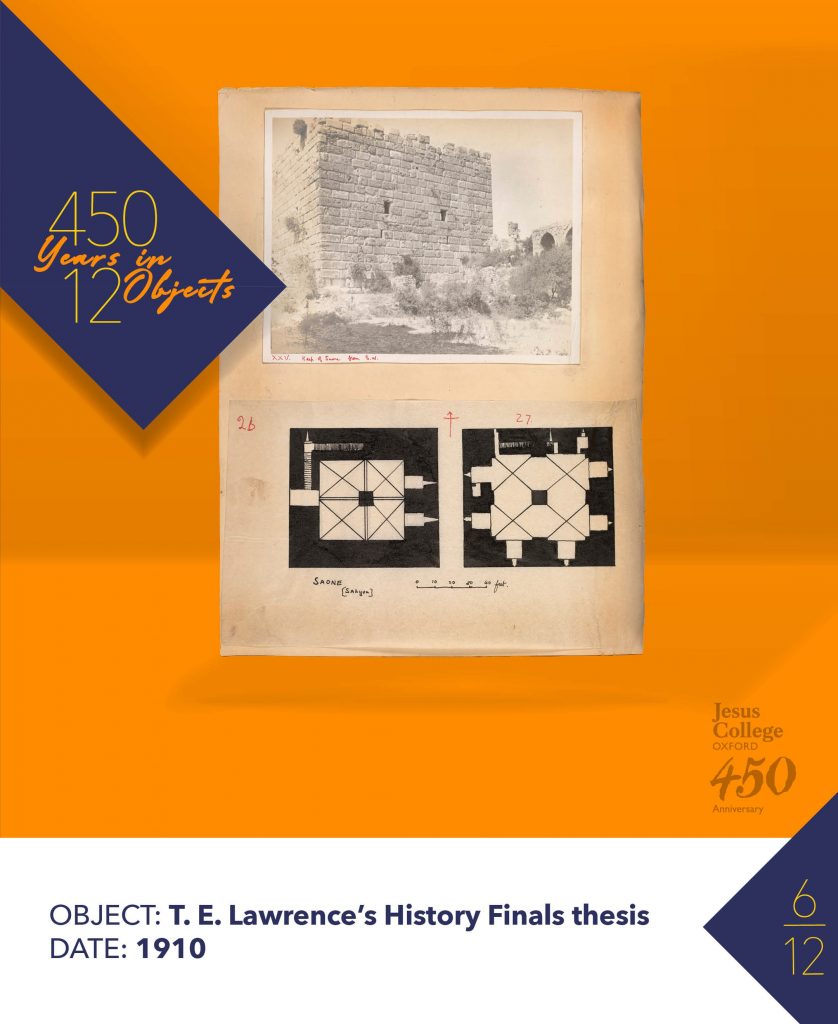 This dissertation, entitled ‘The influence of the Crusades on European military architecture to the end of the twelfth century’, was the product of a remarkable research expedition undertaken by Lawrence in the summer of 1909. Over the course of his eighty-three-day expedition (though adventure is probably closer to the mark), Lawrence covered more than 1,100 miles—most of it on foot, on his own, and with only an old revolver for security—in what was then Ottoman-controlled Palestine, Syria, and Jordan and explored the surviving remains of close to twenty-five Frankish castles in the region.

He was inspired to undertake this mission, in part, by the teaching of the formidable medieval scholar, Reginald Lane Poole (1857–1939), who then held a lectureship at Jesus. Lawrence produced two copies of his dissertation, and both survive. One copy, which may represent a near-completed draft, is now preserved at the Houghton Library at Harvard. The copy owned by Jesus College was given to the Fellows by Lawrence’s mother after his death in 1935.

Lawrence was reluctant to publish his dissertation, sensitive, it seems, to its shortcomings and flaws as a work of scholarship, but he nevertheless continued to add photographs and marginal notes to both copies of the work. Many of these notes, written in pencil in Lawrence’s neat hand, can be observed throughout the Jesus College copy.

The dissertation—first published in 1936 and republished, with scholarly introduction and apparatus, in 1988—marked the first significant contribution to the subject since the 1870s and was an important stage in the modern study of the Frankish conquest, control, and exploitation of the Middle East in the central middle ages. It also represents a fascinating insight into the formation of one of the most important figures in the struggle for Arabic and Jewish independence.

To find out more about the thesis, watch Dr Ayoush Lazikani, Lecturer in English at Jesus College, and Dr Hugh Doherty, Lecturer in Medieval History at the University of East Anglia talk about the unique insights it gives us as to the interests, thoughts, and ambitions of the young Jesus undergraduate who would become ‘Lawrence of Arabia’.

You can also view the previous five objects in the series here.