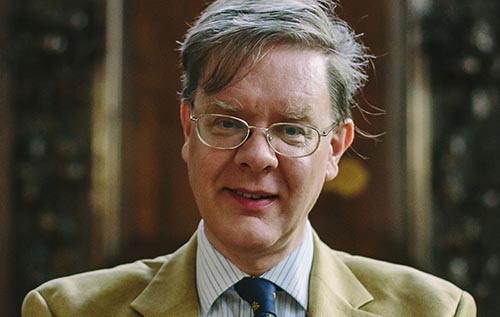 Robin has been Archivist of Jesus College since 2016. He read Classics at University College Oxford as both an undergraduate and a postgraduate, and then trained as an Archivist at the University of Liverpool. He returned to Oxford, first of all to catalogue the papers of Benjamin Jowett at Balliol College, and then to work at the Oxfordshire Record Office. Robin has been Archivist of Univ since 1993, but from 1996-2016 he was also Archivist of Magdalen College. He is now Archivist both of Jesus and University Colleges, and divides his time between the two. He is a Trustee and joint General Editor of the Oxford Historical Society, and is also a Fellow both of the Society of Antiquaries and of the Royal Historical Society.

Robin has researched and published extensively on the history of the University and Colleges of Oxford: he was part of the team which assisted Dr. Felicity Heal in writing our new College history, Jesus College Oxford of Queene Elizabethes Foundation: The First 450 Years (London, 2021). His other publications include:

The Account Rolls of University College, Oxford, 1381/2–1596/7, transcribed by the late David Cox, and edited with additional material and an index by RHDS, 2 volumes (Oxford Historical Society, Vols. XXXIX–XL, 1999 and 2001).

A Catalogue of the Architectural Drawings of Magdalen College, compiled by Roger White, with the assistance of RHDS (Oxford, 2001).

With Michael Riordan: ‘Archives for administrators or archives for antiquarians? A history of archive cataloguing in four Oxford Colleges’, in Journal of the Society of Archivists vol. 30.1 (2009), pp. 93–115.

With Simon Haslett: ‘Historical Connections between Jesus College, Oxford, and Llandysul in Ceredigion: Insights from the College Archive’, in Welsh History Review, Vol. 30 No. 4 (December 2021), pp. 499-520.

Co-editor with Peregrine Horden of, and author of three chapters for, The Unloved Century: Georgian Oxford Reassessed (History of Universities XXXV/1, 2022 [special issue])

Robin has just co-edited with Professor Susan Wollenberg a collection of essays on music at Oxford in the 20th century, which should be published in 2023, and is also part of a team writing a new history of All Souls College.