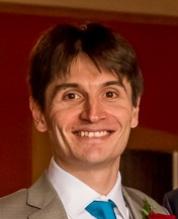 Fellow and Tutor in Engineering Science

Professor Ben Williams is Fellow and Tutor in Engineering Science at Jesus College and Associate Professor in Thermofluids at the University of Oxford.

I have an undergraduate master’s (MPhys) degree in Physics from the University of Oxford, where I remained for postgraduate study, gaining a DPhil in 2009/2010. This was an interdisciplinary project including a significant collaboration with Engineering Science and part-sponsorship by Jaguar Land Rover and Shell. I stayed in Oxford as a postdoctoral researcher supported by a mixture of research council funding (EPSRC PhD Plus scheme) and industrial support (BP).

In May 2014 I began my first academic position as a Lecturer in the Department of Mechanical Engineering at Imperial College London.

In January 2017, I returned to Oxford taking a position as an Associate Professor and Tutorial Fellow, a joint appointment between the Department of Engineering Science and Jesus College.

My research focusses on the development and application of non-intrusive measurement techniques to problems in thermofluids (and elsewhere!). This predominantly involves the use of so-called linear and non-linear laser-based diagnostics, but I am also interested in using “natural” luminosity and other approaches like ultrasound.

Such techniques allow measurements to be made in the kinds of harsh environments you would find inside internal combustion (IC) engines and gas turbines, without disturbing the delicate balance of chemistry, fluid mechanics and thermodynamics which is the heart and soul of the device. These tools make it possible to measure important properties like temperature, pressure, species concentration and flow velocity, to give a few examples.

The combustion of liquid hydrocarbons is seen by some as an antique technology, but the energy density of such fuels is so high that competing approaches can’t take over in some applications. Therefore, it is imperative that the performance of combustors is improved in order to achieve better air quality and reduce climate impact.