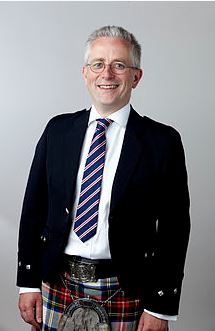 I grew up in Hamilton, in the west of Scotland attending local state schools. I graduated from Edinburgh in 1989 with a BSc in Chemistry. As a Carnegie scholar I obtained my PhD in Structural Biochemistry from Manchester in 1992. Following a NATO fellowship (1993-1994) in the lab of Steve Sprang in Dallas, I took a lectureship at St Andrews Chemistry in 1995.

I was promoted to Reader 1999 and Professor in 2001. I have been awarded Colworth Medal, Corday Morgan Medal, Dextra Medal and Jeremy Knowles Medal. I was elected to fellowship of the Royal Society of Edinburgh in 2005, the Academy of Medical Sciences in 2012, the Royal Society 2014 and the American Association for the Advancement of Science 2016. I was elected a member of EMBO in 2010. I graduated as a DSc from St Andrews in 2016. At St Andrews I held a Bishop Wardlaw Chair. It must always be stressed that these are team efforts and I have been fortunate to have worked with talented students, post-docs and technicians. I was Director of the Biomedical Sciences Research Complex.

I moved to Oxford in 2017 on a fixed term position. I was recently given the title Professor. I am the Director of the Research Complex at Harwell.

A full list of my publications is on google scholar. My interests are in how structure informs function. My lab is best known for work on enzymes and membrane proteins.

My wife, Rachel, and I live in Oxford, our two children are at University studying science and engineering courses. I am a strong proponent of science and its role in society. At St Andrews I was the elected and re-elected representative of science professors on the University Court, the governing body. I have appeared on the radio discussing enzymes, arguing for Scotland to remain in the Union and commenting on research.

In my spare time I enjoy history and spending as much time with family as possible. I have strong links to China, 1000 talent scholar and visiting Professor in Chengdu (2014-2017) and am on the advisory board of a new initiative in Life Sciences at Harbin Institute of Technology.