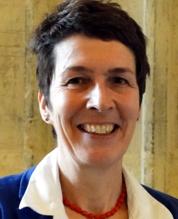 Professor Katrin Kohl is a Fellow and Tutor in German at Jesus College, and Professor of German Literature at the University of Oxford.

Katrin Kohl studied at Westfield College, University of London, obtaining a BA in English and German, an MA in 20th Century German Literature, and a PhD in German. She also has an MA in General Linguistics from the University of Westminster. She was a Lecturer at Westfield College, University of London (1984-88), and worked as a Researcher and then Consultant on German language courses for BBC Television (1983-1988). She became Fellow and Tutor of German at Jesus College in 1988.

German language, German literature from 1730, Special Subjects in Narrative Identities since 1945, GDR Literature, Advanced Translation. I’m interested in close textual work and exploring ways in which authors engage with their society and communicate across time.

German poetry and poetics; the work of Friedrich Gottlieb Klopstock; Rainer Maria Rilke and Franz Kafka; the theory and practice of metaphor. Current projects include a book on The Creative Power of Metaphor – An Interdisciplinary Approach. This grew out of the AHRC-funded research project Creative Multilingualism, which I led from 2016-20 and now co-direct.

I work with schools and other organisations to strengthen languages and increase understanding of the value of the wide diversity of language skills in the UK. In 2012 I set up the Oxford German Network, which collaborates with local teachers and runs the national annual Oxford German Olympiad and German Classic Prize for sixth-formers.