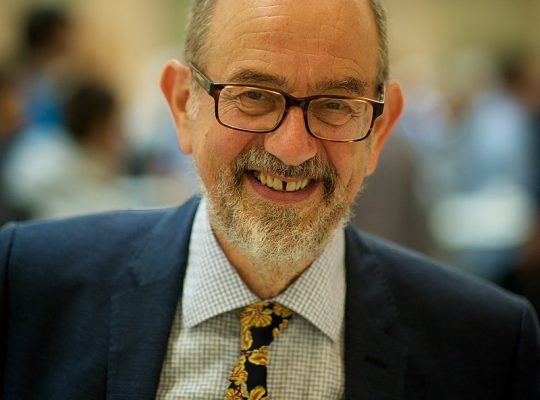 Jesus alumnus Prof Nigel James Hitchin FRS is a British mathematician working in the fields of differential geometry, gauge theory, algebraic geometry, and mathematical physics. He is a Professor Emeritus of Mathematics at the University of Oxford and the recipient of many honours and awards. Nigel studied Mathematics at Jesus from !965-68 before moving to Wolfson College, where he received his D.Phil. in 1972.

Amongst his notable discoveries are the Hitchin–Thorpe inequality; Hitchin’s projectively flat connection over Teichmüller space; the hyperkähler quotient (of Hitchin, Anders Karlhede, Ulf Lindström and Martin Roček); Higgs bundles, which arise as solutions to the Hitchin equations, a 2-dimensional reduction of the self-dual Yang–Mills equations; and the Hitchin system, an algebraically completely integrable Hamiltonian system associated to the data of an algebraic curve and a complex reductive group. He and Shoshichi Kobayashi independently conjectured the Kobayashi–Hitchin correspondence. Higgs bundles, which are also developed in the work of Carlos Simpson, are closely related to the Hitchin system, which has an interpretation as a moduli space of semistable Higgs bundles over a compact Riemann surface or algebraic curve. This moduli space has emerged as a focal point for deep connections between algebraic geometry, differential geometry, hyperkähler geometry, mathematical physics, and representation theory.

Hitchin was elected as an Honorary Fellow of Jesus College in 1998,