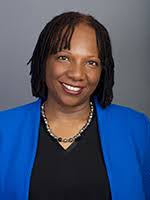 Professor Patricia Daley is Professor of the Human Geography of Africa at the University of Oxford and an Official Fellow and Geography Tutor.

Professor Daley’s previous academic appointments were at Dartmouth College in New Hampshire, Loughborough University and Pembroke College, Oxford. She has taught a range of human geography topics, as well as specialist courses on African societies and environments. At Jesus College she held the administrative offices of Tutor for Admissions (1999-2002) and Tutor for Women (1998-2004). She has been on various College committees, including the Academic Committee, Disciplinary Panel, and on the Accommodation, Catering and Conference Committee.

As a consequence of her research on violence and displacement in Central Africa, she was invited to give a 30th Anniversary address at the Center for Refugees Studies, York University, Toronto, in November 2013.  She was also invited as an academic expert to the High Commissioner’s Dialogue on Protection Challenges, UNHCR, Geneva, in December 2008.  Other invitations included presenting a paper at the High Level Roundtable/Colloquium on Democracy, Governance and the Pan-African Idea: Whither Africa?, at UNECA, Addis Ababa in May 2012, and as a participant at the conference on Pan-Africanism and African Renaissance in the 21st Century organized by UNECA/African Union, Addis Ababa in May 2013.

With respect to her interests in African political ecology, she was awarded an ESRC/NERC interdisciplinary seminar grant on African Environments (2005-2007). She chaired the African Environments Programme for the academic year 2006-7. Her media work includes acting as a consultant for an internationally-screened documentary film on the genocide in Rwanda (Rwanda: the Forgotten Tribe), and participated in panel discussions on topics, such as climate change and Africa, and refugees on the Shoot the Messenger programme at VoxAfrica.com.

Her current voluntary work includes membership of the Council of the British Institute in Eastern Africa and of the Independent Advisory Group on Country Information of the Independent Chief Inspector of Border and Immigration. She is also a committee member and the equalities officer for the Oxford Branch of the University College Union. She chairs Fahamu Trust Ltd, a pan-African social justice movement building organization which publishes PambazukaNews.org.

Professor Daley sits on the editorial board of the journal Gender Place and Culture and is a co-editor of the journal Africa World Review. She is also a peer reviewer for a range of geography and area studies journals, including Political Geography, Third World Quarterly, Journal of Eastern African Studies, Singapore Journal of Tropical Geography, Journal of Modern African Studies, and Journal of Refugee Studies. She has also peer-reviewed grants for the ESRC and the Leverhulme Trust.

Professor Daley teaches the core international migration module for the Preliminary Examinations; the Final Honour School core lectures on violence and security for the Space, Place and Society paper and on global environmental narratives and African rural communities for the Environmental Geography paper. She also teaches the option course African Societies, and delivers human geography tutorials for the core courses for Jesus College students.

Professor Daley was a winner of the University of Oxford Teaching Award 2007-2008.

Professor Daley’s principal research interests are threefold: firstly, on contemporary forced migration and its relationship with identity politics, especially ethnicity, gender and citizenship; secondly, how feminist geopolitics, critical race theory, and African feminist thought can together illuminate the ways in which race, gender, militarism, and violence intersect across transnational space and identify the potentialities for peaceful co-existence arising from alternative non-western centric ontologies; and thirdly, the relationship between conservation, resource extraction, and rural livelihoods within a political ecology framework. The geographical loci of research are East and Central Africa, and the UK.