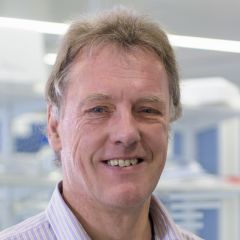 Professor Sir Peter Ratcliffe FRS FMedSci undertook his clinical training at St. Bartholomew’s Hospital, London and after series of posts at the London postgraduate hospitals, moved to Oxford to train in nephrology. In 1990 he obtained a Wellcome Trust Senior Fellowship to work on cellular responses to hypoxia, retrained in molecular biology and founded a new laboratory working on hypoxia biology in cancer and circulatory diseases. He was a Senior Research Fellow at College from 1992-2004, where he taught and supervised clinical students.

He was appointed Nuffield Professor and Head of the Nuffield Department of Clinical Medicine in 2003, a position he held until 2016. He is currently Director of the Target Discovery Institute, and a Distinguished Scholar of the Ludwig Institute for Cancer Research.  He was knighted for services to clinical medicine in the 2014 New Year’s Honours List and in 2019 was jointly awarded the Nobel Prize (alongside William G Kaelin, Jr of Harvard University and Gregg L Semenza of Johns Hopkins University) for the discovery of the key mechanisms that our cells use to detect and respond to low oxygen levels, known as ‘hypoxia’.  Peter and his colleagues found that these same mechanisms are disrupted in many kinds of tumours, allowing the tumours to create new blood vessels to sustain their growth.

Sir Peter’s current research is investigating hypoxia and the role it plays in a variety of health conditions, including heart disease, metabolic diseases and cancer, particularly in kidney cancer, which could lead to potential new cancer treatments.