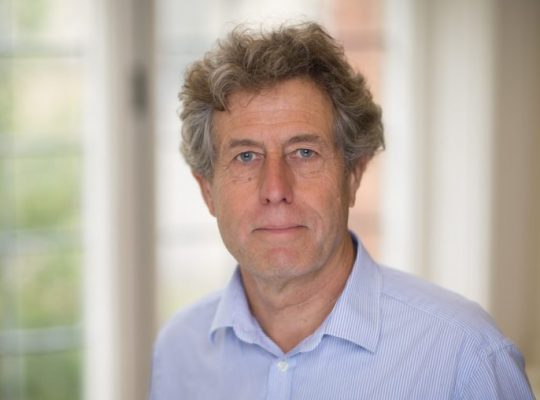 Professor Tim Palmer is Royal Society Research Professor in Climate Physics, Co-Director of the Oxford Martin Programme on Modelling and Predicting Climate and a Professorial Fellow of Jesus College.

My DPhil was in general relativity theory (from Oxford in the mid 1970s) after which I moved into the field of weather and climate dynamics and prediction, first at the UK Meteorological Office and then at the European Centre for Medium Range Weather Forecasts. In 2010 I returned to Oxford as a “2010 Anniversary” Royal Society Research Professor, one of the positions created to commemorate the Royal Society’s 350th Anniversary. I have been a visiting scientist at the University of Washington and was a Rothschild Distinguished Visiting Professor at the Isaac Newton Institute at the University of Cambridge.

My research spans a wide variety of areas, from the theoretical to the practical, in issues related to the predictability and dynamics of weather and climate. On the theoretical side, I am especially interested in aspects of the climate system which exhibit nonlinear behaviour, for example where climatic processes on different space and time scales interact.

Most recently, my research has focused on the notion of imprecise computing to simulate climate at extremely high resolution. I believe strongly in the notion of a “CERN for Climate Change” to tackle many of challenges of simulating climate accurately.

I was a lead author for the IPCC, have coordinated two European Union climate projects, and was co-chair of the international scientific steering group of the World Climate Research Programme project (CLIVAR) on climate variability and predictability. I was elected a Fellow of the Royal Society in 2003, and served on the Royal Society Council in 2008-9. In 2011-12 I was President of the Royal Meteorological Society. I have served on a number of government committees looking at issues from climate adaptation to the role of science in helping mitigate the humanitarian impact of natural disasters. I have won prizes from a number of learned societies and academies including the top prizes of the American and European Meteorological Societies and the Dirac Gold Medal of the Institute of Physics. In 2020 I was made an International Member of the U.S. National Academy of Sciences.

I retain a keen and active interest in my DPhil topic, particularly in relation to the interface between quantum theory, gravitation theory, and nonlinear dynamical systems theory. My hobbies include playing guitar, golf, and riding my mountain bike over the beautiful West Berkshire Downs, where I live. Married to Gill, with three sons.