Renée B Adams is a Senior Research Fellow at Jesus College, and Professor of Finance at the SAID Business School. Her interdisciplinary research centres on group decision-making, and how group identity, information, culture, preferences and values moderate decision-making, primarily in corporate governance but also other settings, the most recent being the art world.

Since coming to Oxford in 2018, Renée has rediscovered her childhood love of art, and is currently exhibiting her own work in the city as part of an end-of-year show titled ‘Beside the Point’.  We caught up with Renée to find out more. 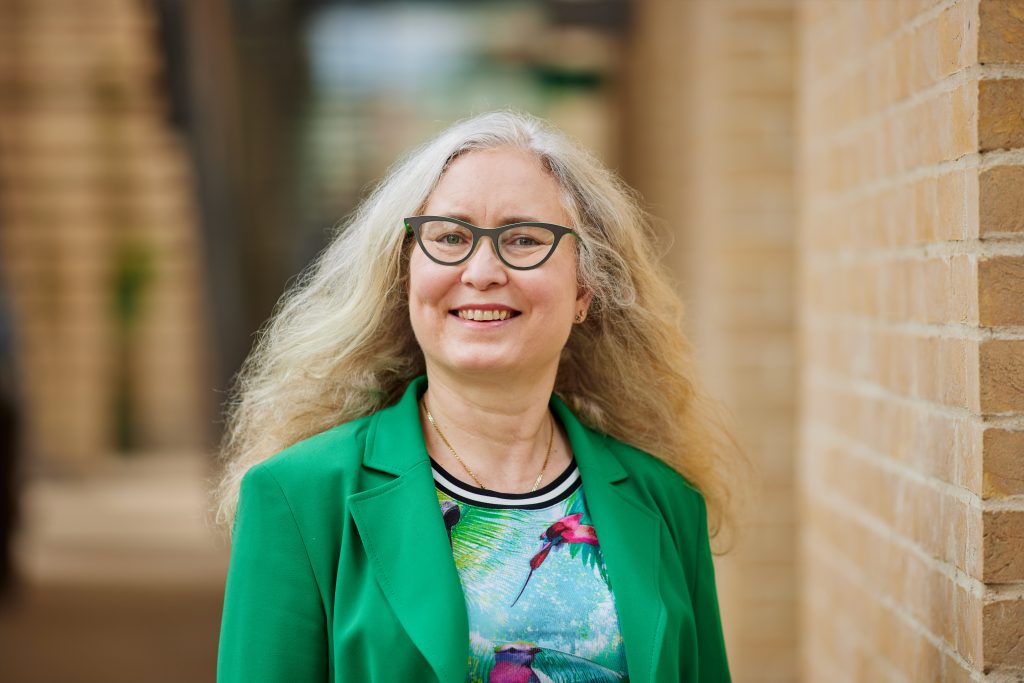 Renée B. Adams, Professor of Finance at the Saïd Business School and Senior Research Fellow at Jesus College.

Renée, tell us why and how you reignited your early passion for art

When I was a kid I really liked to draw, and when I first arrived in Oxford I couldn’t believe how many opportunities there were for adult art classes – they’re normally only for children –  I’ve never lived anywhere like it. Christchurch was running a drawing class, so I joined that and enjoyed it. I also attended a Ruskin School of Art Summer School class. For me, having a creative outlet was important – a focus away from my academic life.

During the pandemic, I took a lot of online art classes – including comic making – and started to build up a portfolio of work. Then I found out about the Warehouse Art School (WAS) One Year Continuing Practise Course, and decided to apply. I don’t think they were sure about me to start with, and I had to go for two interviews before I was finally accepted.

Tell us about the WAS course

It was very different from anything I’d done before – very conceptual in approach, and based on the generation and realisation of ideas rather than having great artistic tools or skills. The course encourages artists to consolidate, develop and professionalise their practise in a creative, non-prohibitive environment. It was like an academic career but flipped; in academia you gather the knowledge and tools before beginning your research career but, on a course like this, creativity comes first. You pursue an idea without necessarily having the artistic tools to translate it – that evolves during the classes, which are guided by art professionals who teach or have taught at university level.

I was in awe of the other artists – they were interesting and amazing, artistically-educated people with different perspectives on the world. These are people I would likely never have met as our educational paths had been so different, but it was very accepting group. 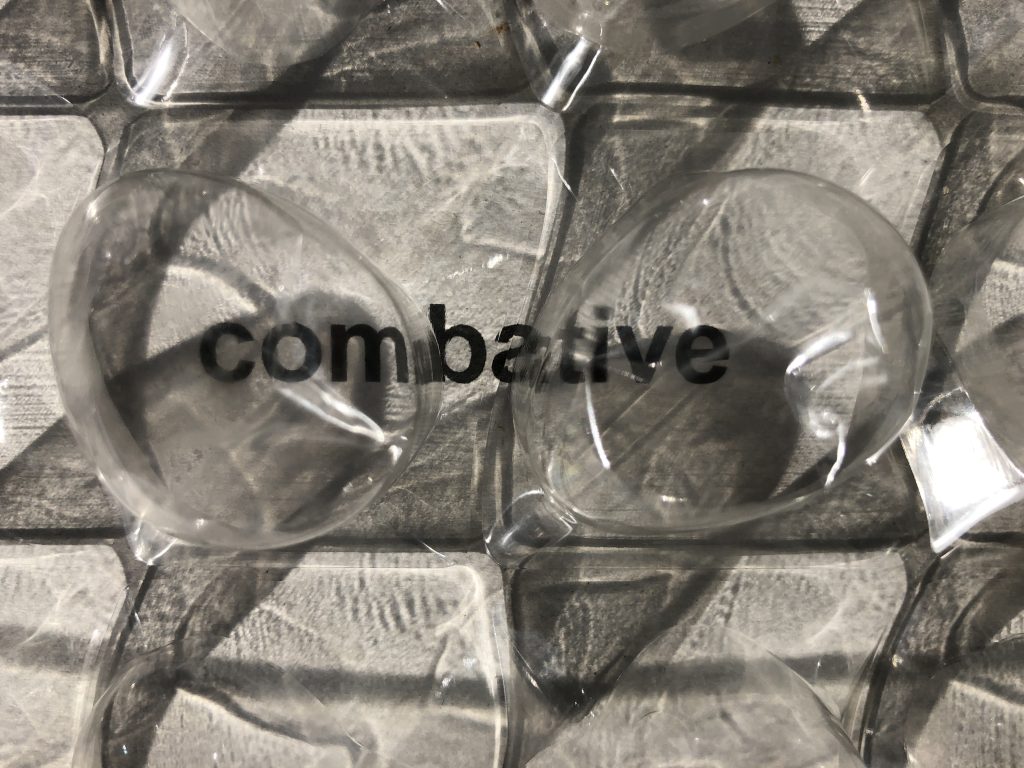 ‘Combative’ by Professor Renée B. Adams.

How would you describe your work and approach?

I have things I want to say, but didn’t have the tools to express them. In research you often find yourself saying similar things, for example on gender. Taking an artistic approach allows more freedom to express thoughts and feelings in new ways.

My current work, and one of the core themes of the ‘Beside the Point’ exhibition, is focused on ideas around gender rights.  Social scientists like myself are increasingly using text as data. In text analysis, words are stripped of their context. As a result, multiple interpretations of word patterns become possible. This can be useful or problematic depending on the subject matter. 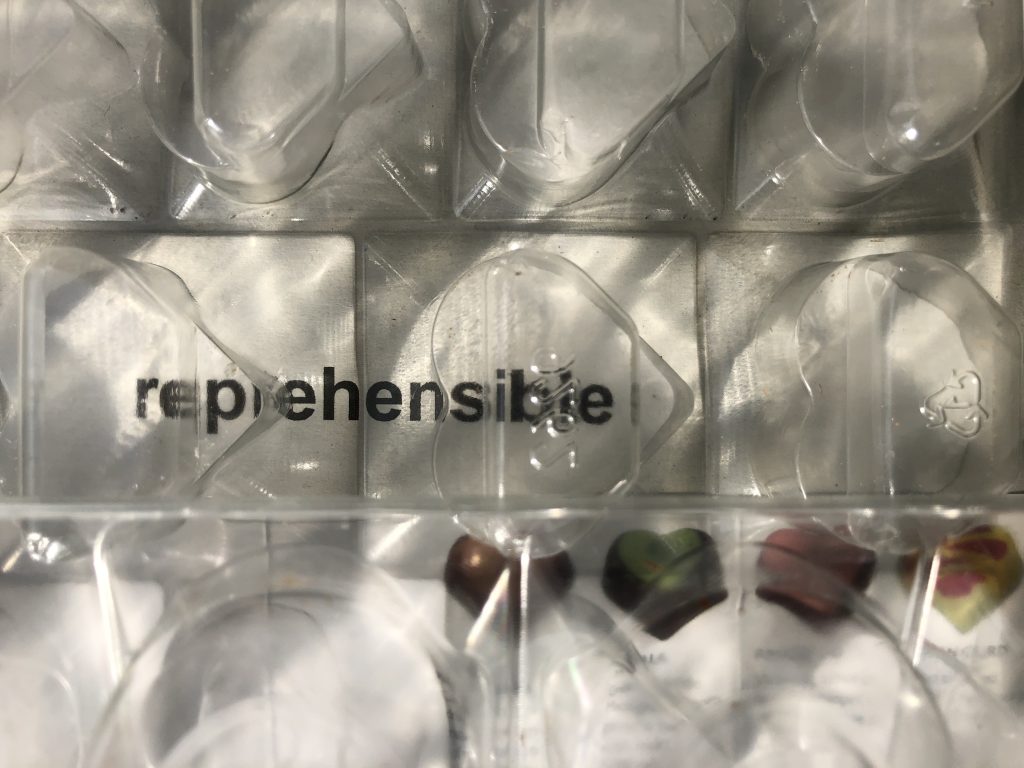 ‘Reprehensible’ by Professor Renée B. Adams.

In my work titled “Sticks and Stones”, I explore aspects of this method from an artistic standpoint. I ask whether stripping the context from a set of hurtful words that were used to describe a woman can remove their sting. By putting these words in different environments, I invite the viewer to explore alternate interpretations of the words and to question stereotypical thinking. 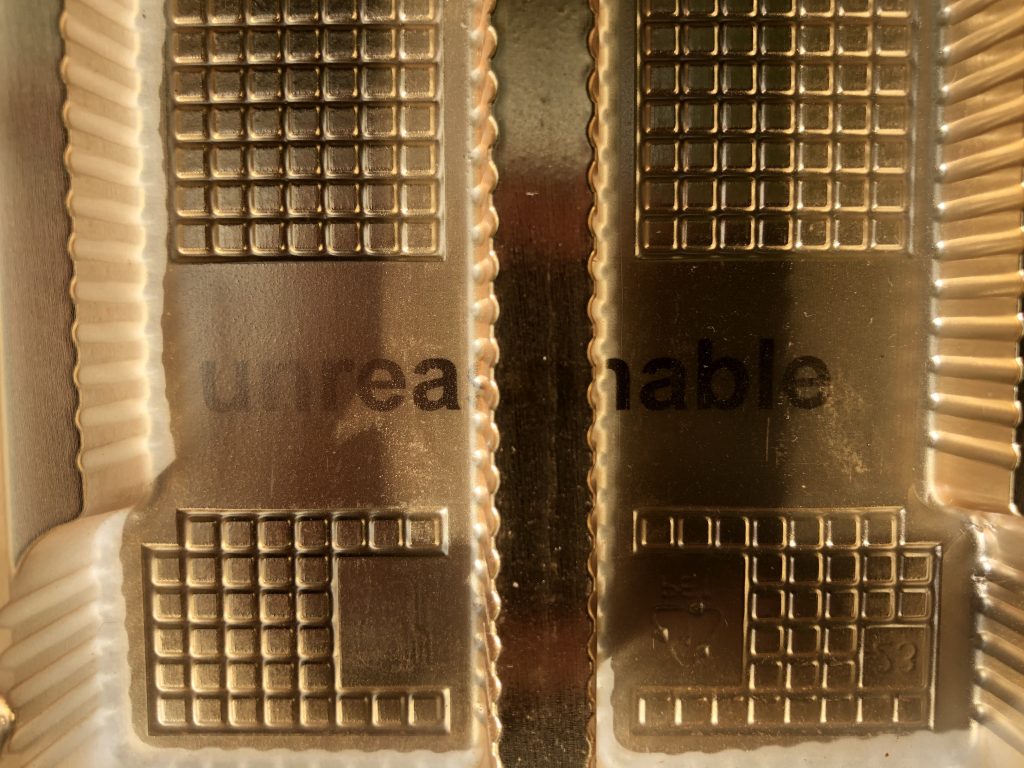 ‘Unreasonable’ by Professor Renée B. Adams.

Your research work on gender bias in the art world has received global media attention, especially the finding that artwork by women sells for, on average, 40% less than their male equivalents. Do you think this undervaluing of women artists is starting to change?

Placing value on an artwork, or on artist, is subject to many influencing factors but mostly the culture of the art world up until this point. Beyond the big names in art are many women artists whose work is of equal importance. I admire galleries like Modern Art Oxford, which has showcased several women artists recently, including Ruth Asawa and Labina Hamid. I think people are a little bit more aware of the issues, but changing the system is a slow process, and still has a way to go.

And do you think your art has influenced your research at all?

It’s been really confidence-building and helped me to think differently about my research. Art, like research, is about innovation and progress; you test new ideas and gather feedback, and then move on with your work. This course, and others I’ve taken, has shown me that there are so many different ways to engage people in ideas. For example, I recently read a research paper that had been designed as a comic book to make it more accessible. I’ve invited all my students to go down and visit the exhibition to see if it inspires them.

The exhibition finishes on 2nd July. What plans do you have next artistically?

I want to do more; to try and figure out what I can do and build up my body of work. I’m going to be a part of the next Continuing Practise Course, and have also signed up to take a drawing class at the Ashmolean Museum. I got into art because life can otherwise be difficult – I’m finding my way and want to reflect that in my art as life goes on.

The ‘Beside the Point’ exhibition is on until 2nd July 2022 at 95 Gloucester Green, and #WindowGalleries in Friars Entry. For more information, click here.